Compared with CM4 porting layer, I found in the function vPortSVCHandler() will set the basepri to zero before schedule to the 1st tarsk: 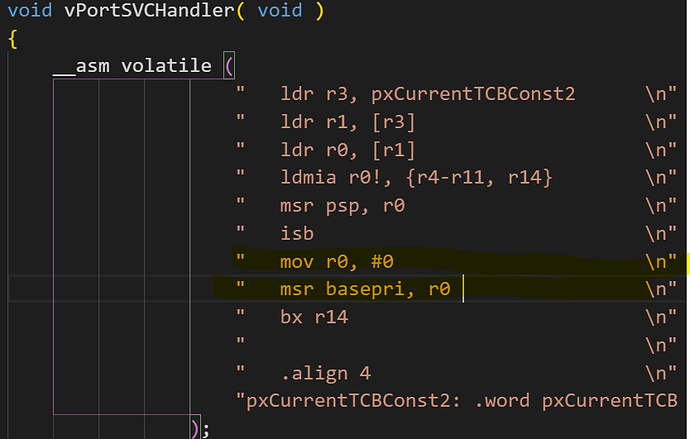 is there any one who knows the reason?

Thank you for pointing it out. This is a miss and we will fix it.

thanks for your quickly response,
I have a question about the affect of this coding defect on CM33 porting layer. In my view, if the basepri is not cleared in the 1st task scheduling, it will cause the scheduler cannot run normally to schedule other tasks, because on CM33, the scheduling is triggered by pendsv handler, which priority is lowest, and if the basepri is not zero, the pendsv handler cannot be issued, and also the task is cannot be switched… So it is really a serious bug… is there any thing wrong about my idea?

Hi, Richard
When the task blocks, or calls any other FreeRTOS API function for that matter, BasePRI will get set to its intended value of 0.
–>OK, I think I got your point, in FreeRTOS API, the critical section use the taskENTER_CRITICAL and() and taskEXIT_CRITICAL(), the implementation is :

and also I know why it will crash in our porting, that’s because we add some error check code in taskENTER_CRITICAL, to do not permit to call FreeROS api when the basepri is not 0, which may cause system hang because the pendsv cannot be issued.

so if the basepri is not cleared in the 1st task scheduling, the system will assert fail in our porting code.

I have no questions now, really thanks a lot for you and your team quickly response.

This has been fixed in the following PR: https://github.com/FreeRTOS/FreeRTOS-Kernel/pull/214

Thank you again for bringing it to our attention.