I am running on a custom board using an STM32L496RGT6 microcontroller which has integrated freertos (release 202002.00) to successfully run the MQTT demo and the HTTPS demo.

When I update aws_demo_config.h and define CONFIG_OTA_UPDATE_DEMO_ENABLED, the demo code executes but hangs in prxCreateNetworkConnection inside the ota demo code. The full stack can be found below: 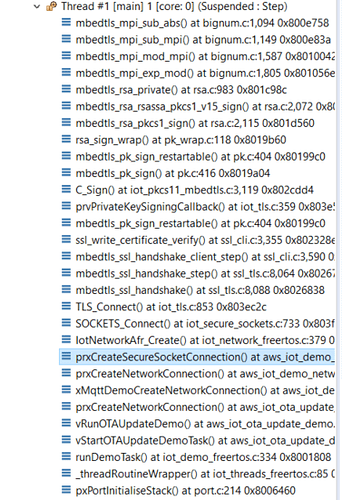 Does anyone have any thoughts about why the the MQTT connection can be established for the MQTT demo, but would hang for the OTA demo? Any suggestions on changes that could be made so the demo code progresses further?

Thank you for reporting this issue and sharing call stack.

As you mentioned you are using a port on custom platform based on STM32L496RGT6 (instead of STM32l475 port) and observing this issue when running OTA demo during MQTT connection, can you please check the memory configuration on this platform and enough stack and heap is configured? My first suspect here is that we might be running out of heap memory when MQTT connection is being established. The size of the FreeRTOS heap is set by the configTOTAL_HEAP_SIZE configuration constant in FreeRTOSConfig.h.

Please check if vApplicationMallocFailedHook is defined and is getting called. This function is called if pvPortMalloc fails due to insufficient memory available in the FreeRTOS heap and configUSE_MALLOC_FAILED_HOOK is set to 1 in FreeRTOSConfig.h.

You can also share the console logs after enabling MQTT debug logs using the configuration mqttconfigENABLE_DEBUG_LOGS in config file aws_mqtt_config.h.

Please let us know if that helps to resolve it or if you have more questions.

Thank you for the suggestions. I’ve tried them out and have some more information.

Could there be a configuration value that needs updating so mbedtls doesn’t get stuck here? Any other thoughts?

With both heap sizes, vApplicationMallocFailedHook is not getting called.

Although it sounds like this might not be the issue in this case, vApplicationMallocFailedHook() will only get called if you are using one of the FreeRTOS memory allocation schemes, and if configUSE_MALLOC_FAILED_HOOK is defined in FreeRTOSConfig.h.

Thank you for sending in these suggestions, I appreciate the second opinion. Do you have any more thoughts?

Hello, at this point, it seems just as likely that you might be blowing out your stack (or both). I suggest modifying the library code temporarily to make calls to xPortGetFreeHeapSize and uxTaskGetStackHighWaterMark. Strategic locations for those calls could be in SOCKETS_Connect and C_Sign, for example.

Specifically for isolating potential stack overflow, in your debugger, capture the start address of the stack for the above thread. As you’re stepping through the code and your call stack gets deeper, periodically check your stack pointer against the starting address and your max size (keeping in mind that the latter gets defined in words, not bytes).

I followed your suggestions and confirmed the stack was overflowing for the demo task. By increasing the stack size I was able to get the OTA demo running to the point where it is constantly checking for updates.