In a project with a single task whenever its priority is set to 0 the system runs as expected, but when its priority is set a value other than 0 (with configMAX_PRIORITIES set to 3) then the function vTaskDelayUntil() never returns. Instead, the IDLE hook fires repeatedly.

For example, the serial output when its priority is set to 0 is:

which is ok. But when its priority is set to 1 or 2, then the output is:

I’ve run out of ideas. Here is the complete code:

This is a reduced task from a project that involves 3 tasks. T1 and T2 are closely related because of a semaphore, and T3 is kind of independent. Whenever the priorities of T1 and T2 are set other than 0, the system stucks. T3 runs with the highest priority.

That’s way I reduced the code to its minimal, but I cannot see where and how I’m failing.

Any help will be highly appreciated!

Which microcontroller architecture are you using?

Please check the tick count is incrementing. You can do that by inspecting xTickCount in the debugger, or by setting a break point in xTaskIncrementTick in tasks.c.

Please also attach your FreeRTOSConfig.h file so I can see the preemption and time licensing settings.

Do you have configASSERT() defined?

Which version of FreeRTOS you using?

I spent all day trying to debug Arduino under Avarice and GDB, and I made it!

But now I’m clueless about where to start looking for. The file tasks.c has a million of functions and I can’t figure out which one is in charge of selecting the next task ready to run. Any ideas?

I forgot to mention the architecture: ATmega328P.

I was writing a long answer to your questions, but I think I need to verify that the function xTaskIncrementTick() is actually being called. I don’t see why not, but I want to be sure. That function is called inside a timer ISR that is fired every 1 ms (look for the last lines):

And the config file is:

In this very moment I’m gonna make the tests and I’ll return.

Yes, the function xTaskIncrementTick() is called even when the task’s priority is set to 1 or 2. So the counter is counting!

1.- I set configUSE_PREEMPTION to 1, but lines 95 and 96 aren’t processed when they should, right?

I asked for the value of xNextTaskUnblockTime variable and I got the value 65535, is that correct?

I need to sleep, but any other questions you have, or any hint, please let me know them so I can answer them ASAP. Thank you!

That isn’t a proper tick timer interrupt (if you are using preemption) as it doesn’t call xTaskIncrementTick, but only vPortYieldFromTick().

Right, the tick ISR and FreeRTOSConfig.h you posted shows xTaskIncrementTick() will not be called, so time will not pass, so the timeout in vTaskDelayUntil() will not expire.

Where did that code come from?

@richard-damon Hi Richard, in fact xTaskIncrementTick() is called and it counts! Please see my answers. I know it counts because a LED that should blink every 500 ms, blinks! (when its priority is set to 0), and now that I got the debugger I’ve seen the system gets inside that function, and it counts!

@rtel As is, the xTaskIncrementTick() function shouldn’t be called, but it’s! Now I’m going to investigate why. Meanwhile please see all my answers in this post so you can see the debug session.

BTW, I got that solution from the official ATMEGA328 port and I just adapted it to Arduino without modifying such platform a lot.

The problem isn’t whether the counter counts or not (and it counts), I need to find out how the priority’s levels are affecting the overall system, do you guys know which function is in charge of choosing to run the next ready to run task?

One thing I do note is I don’t see a definition of configASSERT in your FreeRTOSConfig.h, which can help catch a number of configuration errors. One possibility is that an interrupt has a bad priority and is causing FreeRTOS state corruption.

The main part of the scheduler is vTaskSwitchContext()

do you guys know which function is in charge of choosing to run the next ready to run task?

If you are using an AVR I’m going to assume configUSE_PORT_OPTIMISED_TASK_SELECTION is not set. In which case the following macro in tasks.c selects the next task:

There is one list for each task priority. The while loop finds the first list that is not empty - starting from the last known highest priority. listGET_OWNER_OF_NEXT_ENTRY() then locates the TCB from the next item in the selected list.

@rtel @richard-damon Thank you for your patience. The counter is counting whether the task’s priority is set to 0 or 1, that doesn’t matter, the counter counts. Here there are new facts:

WHEN TASK’S PRIORITY IS SET TO 0

The program stops at line 2643 in tasks.c (inside xTaskIncrementTick() function) and when

This happens when my task’s delayed time is reached every 100 ms (the counter counts and we should that fact let it go):

(You can see the counter is counting.)

Besides that I got this:

pxDelayedTaskList->uxNumberOfItems is set to 1, which I think it refers to my task.

So far so good!

WHEN TASK’S PRIORITY IS SET TO 1

The program doesn’t stop at 2643! Even more, from the debugger I see (worried) that there are not items in the pxDelayedTaskList, which might means my task will never wake up:

I think I need to trace the call vTaskDelayUntil() to figure out why my task is not getting a seat in the delayed tasks list.

I’m attaching a screen capture for the source code line 2643, for quick context: 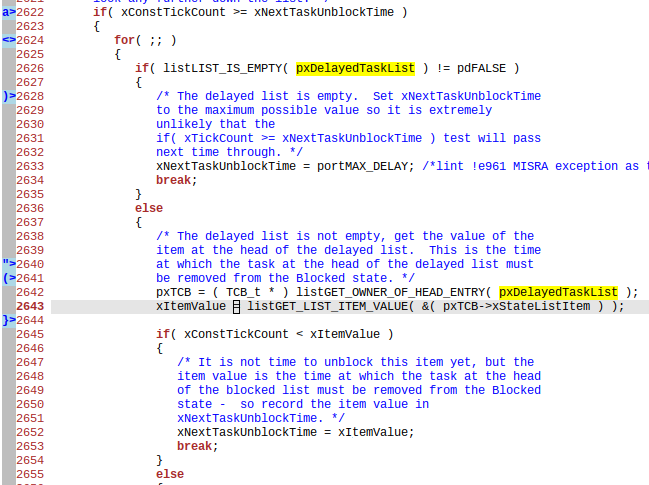 And from this link you can see the LED blinking when the task’s priority is set to 0: 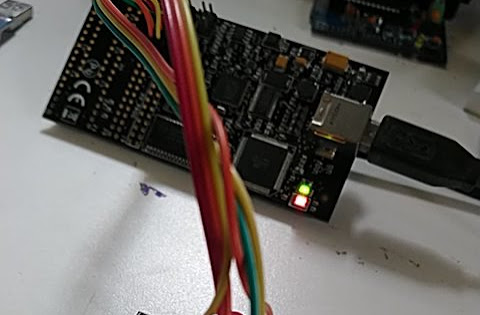 More hints are really appreciated! And I will set up right now the configASSERT() macro.

Agree think you are going to have to step into the call to vTaskDelayUntil() to see what is happening. Make sure the task is added to the delayed list here https://github.com/FreeRTOS/FreeRTOS-Kernel/blob/master/tasks.c#L1326 - you should see the list pointed to by pxDelayedTaskList has one more entry after that call to prvAddCurrentTaskToDelayedList(). Also make a note of the time the task is due to exist the delayed list (xTimeToWake - xConstTickCount). Then break in xTaskIncrementTick() when that time is reached to make sure the task is removed from the blocked list, and added to the correct delayed list.

@richard-damon, @rtel ¡SOLVED! But I’ve got some doubts…

The problem was (is, I’m still investigating wether it’s because of my Arduino porting) that in the tick ISR

was called even when configUSE_PREEMPTION is set to 1, instead of

as if configUSE_PREEMPTION were set to 0. I started a new simple project from scratch and it worked, and as I said, I’m still investigating this missbehaviour. Now those 2 LOCs are called as expected.

EDIT: The problem and solution

Now I know what was going on. The Arduino’s file “wiring.c” in which the system tick timer is defined (and for this matter, all files belonging to Arduino) doesn’t know anything about the file “FreeRTOSConfig.h” file. That’s way the conditional compilation takes the “#else” path, so the program behaves as if it were running under a cooperative scheduler, and the lack of the taskYIELD() calls made the system crash.

Drawback: There’s one makefile on a project basis, so the user might forget to add the flag.

Arduino.h (at the end of the file):

However, while trying to figure out what the problem was I got two a very strange behaviours related to cooperative kernel. Say you have two task, T1 and T2, almost identical:

Even worst, when you assign to T1 a priority of 2, and T2 a priority of 2 (among other combinations), the result is that the system stuck and none of both LEDs blinks.

This happens, I think, because none of the tasks releases the CPU, which makes me ask: whenever you use API functions like vTaskDelay() or similar in a cooperative scheduler, where do you place the API function taskYIELD()?

If you use vTaskDelay() (or related) you don’t need to call taskYIELD() as when the delay enters the block state, it will do the yield.

That’s in the theory. In real world that isn’t happening (according to the results I got while using the cooperative schema).

Why both tasks, T1 and T2 blink at the rate impossed by T2 in one scenario, and why the system get stuck when both tasks have the same priority (other than 0) in another scenario? It seems that blocking API functions don’t yield the CPU.

However, as I’m not planning to use such schema I’ll carry over the answer to this questions for the future.

Thank you all (@richard-damon, @rtel)!

If you use vTaskDelay() (or related) you don’t need to call taskYIELD() as when the delay enters the block state, it will do the yield.

That’s not exactly true. In a cooperative scheduler each task must release the CPU because the API functions don’t yield it. I knew I’ve heard that in Embedded Systems 101.

The blocking API functions do not release the CPU when the kernel runs in the cooperative mode. This fact is very important for the programmers that want to implement such schema, and that they don’t fall into the same problems I did. Please see the text in bold in the quote below (from FreeRTOS):

The critical plant control functionality is once again implemented by a high priority task but the use of the cooperative scheduler necessitates a change to its implementation. Previously the timing was maintained using the vTaskDelayUntil() API function. When the preemptive scheduler was used, assigning the control task the highest priority ensured it started executing at exactly the specified time. Now the cooperative scheduler is being used – therefore a task switch will only occur when explicitly requested from the application source code so the guaranteed timing is lost.

I think calling vTaskDelay() is volunteering to give up the CPU.

I think what they are talking about in that section is that the switch BACK to the high priority task won’t happen until the low priority task does a taskYIELD. ‘Blocking’ IS an explicitly requested yield. It would be totally antithetical for a delay operation in a RTOS to just spin wait for the time period and not let another task get CPU time.