Hi,
I have created IoT role, SNS topic on AWS IoT console and activated email subscription for SNS notification. I have configured below security profile for Device Defender Could-Side metrics .

i am receiving SNS email notification from AWS, even though device sends less than 5messages in 5minutes. below is the email received for any number( <5, >5, =5) of messages sent from device.

How can i configure SNS in such way that i receive email notifications only when device violates the predefined behaviour of security profile created on AWS IoT console.

If you look at the message, it says metric count value is 7. When you say only one message is sent, are you counting all the messages like CONNECT, SUBSCRIBE, PING etc?

No. I didn’t count CONNECT, SUBSCRIBE. do we need to consider these also, till now i am considering publish messages from device to AWS IoT Core.

I think you need to count these too. Per definition here, these are the number of messages sent by a device.

ok thanks for the inputs. I will verify this. 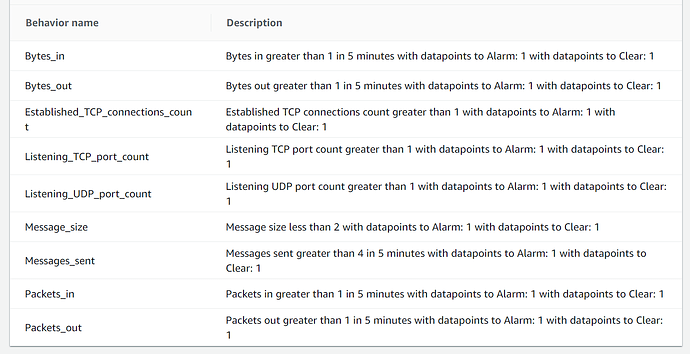 Yes, this is device side metric. Device is sending networking metric only once.
I am running below Device Defender FreeRTOS demo application.

Device is sending networking metric only once.

That is the problem. What you are seeing is Missing Datapoint alarm because you stop sending this metric. You need to ensure that the networking metrics are sent periodically forever.

thank you, but i am receiving this notification with in 2minutes after device sends networking metrics to AWS IoT core.

Can you try after changing the code to send metrics forever?

Thanks for reply. I have updated my security profile, its working fine now.

Hi,
I have created my defender security profile as below.

I am receiving SNS email notification, when my sends more than 7messages and less than messages also, which i didn’t want it to be. As per my understanding i should receive email notification only when my device violates defined metrics behaviour in security profile. Below are screenshots of email i received in both cases.
when device sends 9 messages—

The following is from this page:

Now, if you look at the notifications that you get -

thanks for reply. I understood the notification now.

Hi,
Can i add subscription policy so that i can receive only “violationEventType”:“in-alarm” email notifications.

I am not sure that can be done. Why do you want to do that? Those notifications do provide you valuable information when you are investigating an issue - they tell you that you have fixed an issue.