For FreeRTOS tutorial suggestion: the xEventGroupSetBits() and xEventGroupWaitBits() API functions cannot be used (because of the non-atomic operation) if Task A, Task B and Task C attempt to synchronize using an event group. The xEventGroupSync() API Function is a good choice.

First, this isn’t a “common” problem, and many programs just don’t need this form of syncing. More common is on task starts up a number of tasks and waits for them to finish,

Second, it is possible to write an equivalent operation with simpler primitives, it just isn’t as transparent what is going on, and the code may need to make assumptions about the code.

It needs to be lower than all of the other tasks so there is no actual race between them signaling they are done with the previous and then waiting on the event to start the next operation.

it just isn’t as transparent what is going on, and the code may need to make assumptions about the code

The method you provided is a classic solution which is also recommend from ucos user manul. 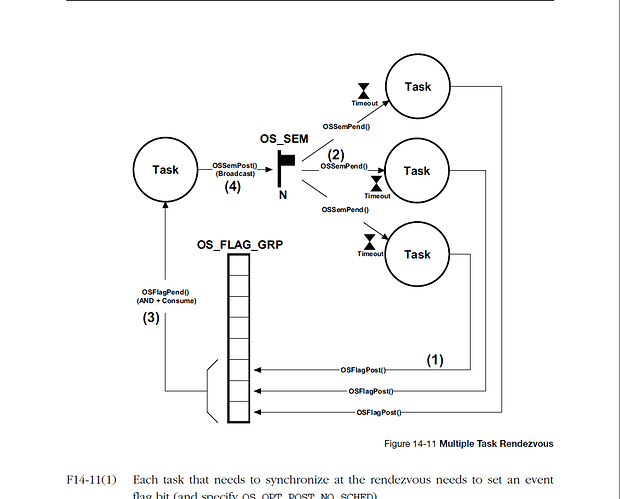 And the key to this solution is the priority of the additional task must lower than all the sync task.

In my opinion, the key to this problem is the event post/send operations in the task which is the last one enter the sync point is not atomic. May I use the critical section to make it uninterrupted?

In general, you can’t ‘Wait’ (block) while in a critical section, so you have a problem there. It works in some ports but not others.

I suppose an interesting extension would be to allow waiting/blocking in a critical section which actually implies a “hole” in the critical section for the duration of the block, so you can know that you actually have reached the event wait.

I’m a bit confused by this discussion. FreeRTOS has the API xEventGroupSync() that solves this problem, as mentioned in the first post, so why have a discussion about how to do it without using that API?

I am writing a RTOS hal and some other RTOS don’t have this API, so I want a general solution to solve this problem.

Interested to know why you are writing a HAL, as other HALs already exist, maybe you want something universal. Is this something we should be interested in too - you can contact me privately at r dot barry at FreeRTOS dot org if it’s not something you wish to discuss here. You have highlighted the issue with HALs though - you only get the lowest common denominator - that is - exposing only the functionality the RTOSes have in common with no special source.

you mean this websites: http://r.barryatfreertos.org/ ?

He meant the email id -r.barry@freertos.org.