Context Switch for the Task being unblocked

Hi I am a beginner to FreeRtos and I am wondering that when I have two tasks with the same priority, with the 1st task being continuous and the 2nd one being event triggered. When the 2nd task is unblocked when it is triggered by the 1st task, will the 2nd task now immediately go into the running state instead? This is what I thought would happen as it is what I observed for semaphore cases, but in the image provided below, the receiver task does not go into running state immediately after the 1st “xTaskNotifyGive(receiverHandler)" command is called(which the receiver task should now be unblocked already?), but instead, the receiver task only goes into the running state after all 4 commands are called and when the sender task is in the blocked state due to vTaskDelay.

Can someone please help clarify on this? Thank you and I really appreciate that. 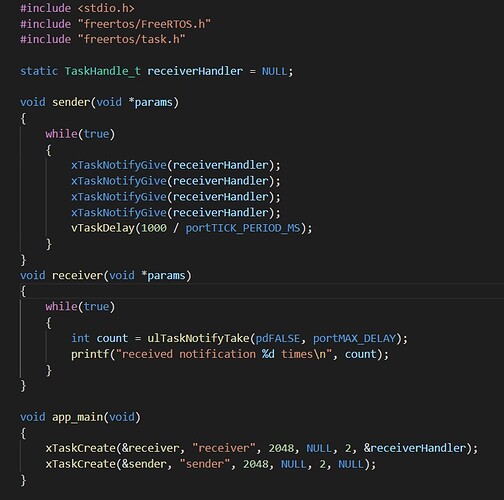 When the 2nd task is unblocked when it is triggered by the 1st task, will the 2nd task now immediately go into the running state instead?

Assuming that you are using preemption, that would only happen if the task 2 is of higher priority. This book by Richard Barry provides detailed explanation about task scheduling - https://www.freertos.org/fr-content-src/uploads/2018/07/161204_Mastering_the_FreeRTOS_Real_Time_Kernel-A_Hands-On_Tutorial_Guide.pdf

@Durian Does the above answer your question and if so can you mark it as the accepted answer?