CM33 hard fault while trying to yield from secure

While debugging a bad driver on the secure side (which ended up stuck in an endless loop), I realized that FreeRTOS crashes to a secure hard fault while trying to make the corresponding task yield. Of course I am calling portALLOCATE_SECURE_CONTEXT at the start of the calling task. I guess there is some ISR setting I still need to correct.
Any pointers on which one that might be?

I presume you are running FreeRTOS with trustzone support, as per this link, Using FreeRTOS on ARMv8-M Microcontrollers - FreeRTOS - so running FreeRTOS on the non-secure side but making calls into the secure side - is that right? Which version of FreeRTOS are you using (the comments at the top of the source files will say) - asking as there have been changes in the most recent code to statically allocate a fixed number of secure contexts.

If I understand then you have a FreeRTOS task calling a secure side function that accesses a driver. How is the task yielding before the crash - is it trying to enter the Blocked state because it called an API function with a timeout, or something else?

Yes, I am using FreeRTOS with trustzone support, running on the non-secure side but calling a secure function.
In my case that function was a secure driver (accessing the TRNG hardware) which stayed in a loop because of a different error. But after an additional tests, it looks like anything which goes into a long/endless loop on the secure side had the same effect: After some time RTOS tries to switch to another task and on that generated a secure hard fault.

it looks like anything which goes into a long/endless loop on the secure side had the same effect:

That should not happen. Have you tried to analyze the hard fault and find out the offending line? Is it possible that you need more secure stack size - What is the value that you pass to portALLOCATE_SECURE_CONTEXT?

You should also consider enabling Memory Management Fault, Bus Fault, and Usage Fault exceptions. If you are using CMSIS, this document provides a way to enable these: https://www.keil.com/appnotes/files/apnt209.pdf

Is it possible that you need more secure stack size - What is the value that you pass to portALLOCATE_SECURE_CONTEXT?

I started with 32 words which should be more than enough for a secure side function with one internal 32Bit variabel, but also multiplying that by 4 does not make a difference.

That should not happen. Have you tried to analyze the hard fault and find out the offending line?

I have not yet found a good way to look back since the stack traces directly back to “signal handler called”
I know that I have seen similar things in the past when SVC was executed with interrupts disabled (as seen in my last thread) but I did not touch those.

EDIT: Looks like my timer tick (I use lptim for ticks) is the culprit, now I “just” need to find out why. I can see that it was promoted by HFSR.FORCED being set but I have no clue why since from my understanding secure context alone should not change priorities.

Have you increased the size of the secure side stack. If there is a context switch it needs to hold the task’s context so 80 words is likely to be a minimum - but start with 200 to test if it helps.

From my current state of debugging it looks like the RTOS context switch is not even starting because the µC context-switch to handle the tick interrupt is already what is failing. UFSR=0x10 indicate a µC stack overflow. Though I have no idea why that should happen since there is around 50kB empty memory left for that.
I guess I’ll find out eventually

Edit:
Do I read this correctly in stating that the secure psp reached its limit? Is that one handled by FreeRTOS? 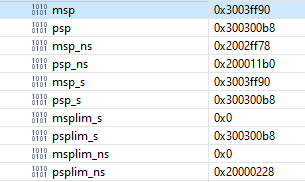 Second EDIT: I found it

: configMINIMAL_SECURE_STACK_SIZE is also used inside the task.c itself and my setting of 32 taken because I don’t remember why was too low for that one already. Taking 1024 (is this in bytes or words?) from the CORTEX_MPU_M33F_Simulator_Keil_GCC demo repairs everything.

Thank you for taking time to report back.