Would you help to give some comments about it? Thank you. 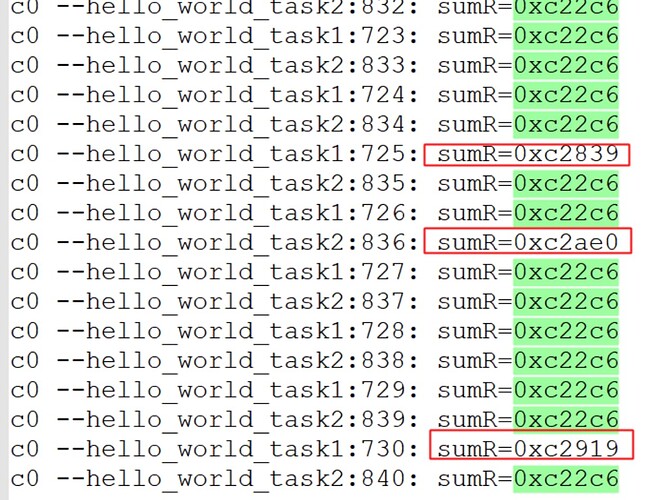 Similar to Zynq Ultrascale MPSoC task floating point corruption - #17 by wat recently. Has the compiler version changed recently? Are you using floating point instructions in interrupts, or something like memcpy() in an interrupt that may be optimised to use floating point registers?

I did the experiment with patch fpu-irq-handler-float-save-restore.c

This is what I did

This is a new issue we observed, no compiler change

It is curious that corruption would occur even with every floating point register being saved on interrupt entry and exit. Can you please zip up your FreeRTOS/Source directory and send it to me (with these changes made) so I can look into it a bit further. You should be able to attach the zip to the post, if not you can send it to r dot barry at freertos dot org. Thanks.

Thank you for offering this kind help. We found the reason.

More illustration for other people who may have doubt about it (apply for ARM CA63):

I am running on MiniZed, Zynq 7000, Cortex A9. I inserted the float_calc() into two tasks, and I saw similar results, that is, errors detected in response from float_calc(). I have since inserted vPortTaskUsesFPU() into each of the tasks (at top of task, and I have not seen an error since. (I have been running for about 20 minutes now.)

BTW, I had also set up use_task_fpu_support in the board support settings, but I have now turned if off when experimenting with vPortTaskUsesFPU().

Here is a relevant link for folks reading this thread in the future: https://www.freertos.org/Using-FreeRTOS-on-Cortex-A-Embedded-Processors.html#floating-point

Update on this - the reason float_calc() fails is because a float was used in an interrupt service routine. After changing that float to uint16, I no longer get failures with float_calc().
If float is necessary in isr, what registers need to be saved/restored? (Or is it a different set depending on the processor?)