Using FreeRTOS Plus to handle UDP communications on TI Hercules

Here are my pack_struct_start.h and pack_struct_end.h files. No other edits required to resolve the #85 errors/warnings.

IT IS NOT COMPLETED… currently, the FreeRTOS+TCP files are integrated and it will compile cleanly. In addition, I have started the updates to NetworkInterface.c that will be needed. 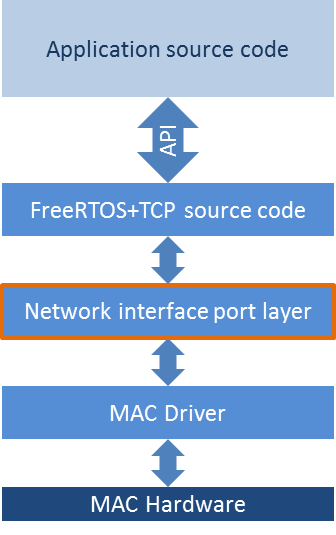 I’ve chosen to use BufferAllocation_2.c and pursue the “simple” interface as described in the porting guide.

Thanks for sharing this project! I had a look at your networkInterface.c and added some _HT_comments.

I’m still slowly making my way through the changes required for FreeRTOS+TCP. There has been a lot to absorb. I’m currently getting this set of undefined symbol errors:

I’m expect there is something simple I’ve forgotten to do but I don’t know what. Just a reminder… prior to addition of FreeRTOS+TCP files… I did have a FreeRTOS demo running on the RM57L with portUSING_MPU_WRAPPERS == 1.

I think the MPU prefix comes when you use the MPU protection wrappers. You need to make sure you have included source/portable/common/mpu_wrappers.c in your project.

There were a few of these that can be fixed by having the right defined variables. Your application will determine exactly how you are going to fix the problems you have encountered. Because I have no need for using TCP, and therefore by extension DHCP and other protocols, our solutions will be different.

MPU_xQueueCreteCountingSempahore is a function that I managed to resolve by going to FreeRTOSConfig.h and defining the following variables:

Make sure that the definition is not changed elsewhere.

I believe that you should be able to do a search using CCS to find the other functions, but you should find them in os_mpu_wrappers.h If you ctrl+click on the declarations, it should guide you to where the definitions are, as well as give you an idea as to what variables need to be defined. I’ll do some digging on my end and see if I can find the solutions for the other undefined symbols, but I know for sure that I did solve the counting semaphore issue. I’m not so sure about the others at this point.

Note: In the end, have needed to write a dynamic memory allocation function to make the xQueueCreateCountingSemaphore function return no issues. I’m having issues getting it to work though. We can collaborate on that when you get to that point.

xQueueReceive: I didn’t encounter this issue. This is likely because I am using the automatically generated HalCoGen files for FreeRTOS. For me, xQueueReceive in FreeRTOS_IP.c maps to MPU_xQueueGenericReceive. There are no defined variable fixes that I know of.

xQueueSemaphoreTake: originates from xSemaphoreTake in BufferAllocation_2.c (line231) For me this also maps to xQueueGenericReceive. I’m not sure how to help there either, unfortunately.

@ajsmart92
Thanks for the comments re: FreeRTOS.h and FreeRTOSConfig.h. That resolved the issues you noted.

I also started with a FreeRTOS port generated by Halcogen. I have a clean compile of FreeRTOS v10.3.1 after updates that runs a simple two task demo okay.

I’m currently chasing changes related to the random number marcos/functions needed for FreeRTOS+TCP. I’d welcome any insights on that.

Do you have UDP and/or TCP running? If yes, can you share anything from your port of FreeRTOS+TCP?

I do not have them running, but I do have a random number macro working that you can use:

This file is what I have been able to narrow down to the minimum number of macros that I need to define. I haven’t worked on it in a little while, so I’m not confident that they all work. I’m pretty sure that it’s a work in progress.

I can’t upload the file, but it is titled defineFuncs.c. In adding it to your projects, you will need to add some includes to header files, but after that, it should compile without issues. The work I have will be included in the next post.

The version in Halcogen had been updated by TI to support the MPU as the version in the FreeRTOS download doesn’t.

//I will need to write a function for this.
/* Send a network packet. The ownership will be transferred to
the driver, which will release it after delivery. /
/ The network driver is responsible for freeing the network buffer
after the packet has been sent. */
BaseType_t xNetworkInterfaceOutput( NetworkBufferDescriptor_t * const pxNetworkBuffer, BaseType_t xReleaseAfterSend )
{
BaseType_t ret = 30; //typedef long
return ret;
}

void vApplicationIPNetworkEventHook( eIPCallbackEvent_t eNetworkEvent )
{
//Nothing done in the other hooks, so I don’t think that we are going to do anything with the
//function here, but there may be something that we need to do later.
}

Sorry, I accidentally pressed on REPLY. Please ignore this message.

is not how it was meant to be.

*pulNumber must be set in the function.

If you have nothing better than rand(), you can define it like this:

This implementation assumes that rand() returns a 15-bit random number.

Note that the AWS library has a much better implementation. Some MCU also have a random generator as a peripheral.

About srand() : please make sure that after every start-up of the device, a different sequence of numbers will be generated.

I’ve got past the random number problems for now. I’ll clearly need to revisit this in more detail but I didn’t want it to block other work on FreeRTOS+TCP port.

So, I’m back to chasing them down. I still have much more to do in NetworkInterface.c so I’ll try to figure this out in the background.

I’m thinking that my remaining errors are due to the fact that I started with a TI Halcogen FreeRTOS v9.0.0 project and my updates to FreeRTOS v10.3.1 weren’t 100% complete.

Gaurav-Aggarwal-AWS wrote on July 05, 2018: +xQueueGenericReceive+ was an internal function which used to be there till FreeRTOS Version 9 and was removed in FreeRTOS Version 10. https://sourceforge.net/p/freertos/code/HEAD/tree/tags/V9.0.0rc2/FreeRTOS/Source/queue.c https://sourceforge.net/p/freertos/code/HEAD/tree/tags/V10.0.0/FreeRTOS/Source/queue.c You seem to be using a library which was compiled with an older version of FreeRTOS. Please try to replace it with a version compiled with th…

I found that in my project…

I’m trying to clean that up now.

Just confirming that did fix my errors related to MPU_xQueueReceive.

Continuation… Strangely, while os_mpu_wrappers.h has the following

So there’s the problem!

Continued… I added a function for MPU_xQueueSemaphoreTake and that resolved the final error.

Back to work on NetworkInterface.c … more to do.

I reviewed my files to see which, if any, FreeRTOS files were still remaining from the v9.0.0 version produced by Halcogen vs. my port of v10.3.1. There are three…

Unfortunately, these are all in the portable directory of FreeRTOS and there is no pre-existing versions (that I know of) for v10.3.1. So, I kept them.

The recent issues I’ve been having with os_mpu_wrappers.c are a reminder that I should expect these stale files to be a potential source of problems as I work on the port of FreeRTOS+TCP.

I’m confused on the Rx process. What I was expecting is that EMAC Rx triggers DMA that move moves Rx data into memory. Then DMA interrupts and a deferred ISR (task) processes the buffers to validate and extact packets.

But I’m getting lost. Part of the problem of course is that I don’t have the advantage of an exisitng port for the Hercules RM57L. This causes another problem in that I have had to look a ports on other platforms.

I have a TI Halcogen HL_emac.c (driver) that provides an extensive set of functions. I’ve been able to figure out how to use many of these functions but I’m simply lost on the Rx side. I’m expected to have to have an ISR that triggers a deferred ISR task.

Any pointers/hints welcome… high-level. Doesn’t have to be a tutorial, I just need a treasure map!

Update from my end: I’ve had other projects take the bulk of my focus since we’ve talked last, but I will be able to work more on this issue in the coming week. I found an issue with some emac functions that leads to dataAbort errors. This will likely prove useful as we get the transmit functions working well.

I considered the advice from @htibosch to use phyHandling.c carefully. But in the end I felt more comfortable mapping to the TI Halcogen generated code. So that’t the path I’ve been going down.

I’ll post the code here when I’m done installing all of my bugs!

It’s taken me quite a while to make my way through network initialization for the Hercules RM57L. I had difficultly understanding the design intent and function of TI Halcogen code vs. the various examples of FreeRTOS+TCP.

I’m now trying to piece things together and I find myself getting lost trying to understand how NetworkInterfaceInitialise() gets called the first time.

I see from examples that main.c has a call to FreeRTOS_IPInit() before the scheduler is started. But I then get lost.

Can anyone give me a high-level overview of how NetworkInterfaceInitialise() gets called for the first time?

Sure, via prvProcessNetworkDownEvent()… but conceptually, I’m not getting how that function gets triggered to start things up.